Join us today as we interview one of our users, a multi-talented artist named Sage Suede. Listen to his music on Soundcloud here: https://soundcloud.com/sagesuede

“My name is Corie, and I’m with ZenBusiness. Today I’m here with Sage Suede. Can you tell me a little bit about yourself?”

Hi, my name’s Sage Suede. I’m a local musician and model in Austin, Texas. I’ve had my brand for a few years now. I started in 2015 and I just started a fashion brand for it. I formalized my business recently as an LLC with ZenBusiness.

“That’s really cool. You said that you were doing clothes, as well, so is this kind of like a lifestyle brand that you’re working on?”

I’d say it’s a lifestyle brand. I do a kind of a streetwear style because I want more of that fusion, and I have a lot of inspiration when it comes to casual clothing. I feel like I have a pretty good perspective as someone that’s been involved in modeling, and most of my clothes from thrift stores; that actually gives me a very variable style.

“What were you doing before you started your business?”

Before I started my business I was in college. I made a demo while I was in college at the recording studio there, and currently I’m still working full time in marketing because I jumped into this, without so much capital. I’m learning on my way since I do pretty much everything myself.

“That’s how things go sometimes. So, your business as Sage Suede, what inspired you to start this business? You said you were in marketing and then you were doing some modeling, but what really made you think, ‘Oh, man, this is where I want to head?'”

It’s kind of always been my long-term pursuit and a passion project of mine. As a kid I played drums and piano and guitar and clarinet and I started teaching myself beat production in sixth grade. It’s just something I’ve been doing for my whole life, and it’s reached a point where it sounds a lot better than it used to. I have reached a lot of challenges along the way with developing the music. With most artists nowadays on the radio, they have 40 people on an album or more and everybody’s expecting you to be at this quality level and it’s really a challenge to get there. I do feel I’m very close to that level, if not at that level. Now after having made my demo my new EP is going to be really good because I really honed in on those skills.

“I think that artists these days almost have a task force behind them. There’s all the social media aspects and the online aspects, so it’s really hard to do by yourself. So I think it’s very admirable that you’re doing that.”

Nowadays they kind of expect artists to reach a pretty big level before they’ll even sign them on or consider them anymore.

There’s more than a few reasons. One of the main reasons was I’ve been Sage Suede online for about two years… I chose an LLC because I didn’t want my personal assets to be incorporated in the business. I’m starting a business, and I have to take a loss while I’m starting it and I can’t tie my entire life to it.

“Do you have a full digital storefront or do you sell anywhere in person in Austin?”

It’s all digital at the moment. I’m going to start selling it as merch at performances, but I’m waiting on the performances ’til I finish my EP. I did a lot when I was still in Boston, but when I moved back to Austin I didn’t even have a car, so I had to take off more time. Now I want to finish the EP first because it’s so much higher quality. Then I will I start performing again.

“That’s understandable. We kind of talked about what inspired you, but did you have any particular people or artists that inspired you when you started to get into music?”

That’s a hard question because there are so many different kinds of artists. My perspective is very global because I’m a polyglot, so I speak German, Portuguese, Spanish, a little Russian, and I’m all over the place with that. Languages have always been a passion of mine since I was a kid. A lot of my favorite artists are foreign bands, and I listen to music from all over the place. My perspective is very different from where most people perceive music.

There’s a lot of aspects that I really want to incorporate in my music. I do really enjoy hip-hop because the drums are very good. I would love to incorporate some more of that Brazilian style of drumming. I really like electronic music, so I’m very influenced by French electro, German electro house, and all kinds of stuff all over the world and that just all comes together as what I ended up putting out.

“I look forward to hearing your new EP.”

“What were you most afraid of when you started this venture? What really was scary for you?”

That’s a hard question. It’s changed a lot over time. When I first started I was pretty scared of performing. I had a lot of stage fright. I did some classical music training as a kid. I was in band and I made it to area band for two years. I ended up quitting after my sophomore year of high school, but I was very serious about it. I practiced for five hours a day, but the problem was that I would get really nervous in front of people. Everybody always told me I was a state-quality musician, but I would always choke at the performances on stage. What I realized over time is that I actually do have a lot of performance experience. It’s not really something for me to be worried about. It’s still something to be a little bit nervous about, but it’s just because I actually care about how well I’m doing.

“I think even super famous people who go on stage still get that moment of anxiety. At least I hope they do. Otherwise, they’re god level; they’re too cool.”

That adrenaline is a good thing.

“Maybe they can focus on it and use that. For you what was the most difficult part of starting your business?”

I’ve had to do just about everything. It’s really challenging because I work full time in marketing and I’ve learned how to build websites during my marketing internships. I started audio editing really young, so I’ve gotten pretty good at it by now, but if you look at my demo, there’s still errors. I’ve gotten to this point by just consistently working towards it. Web design did take me awhile. I’m still having some issues with it.

“It is hard, let me tell you. As a designer myself! It is a long road.”

I had to learn graphic design. The new clothes I’m doing, I’m designing them. It is taking some time. I think it’s a time commitment, always additional time in my day. I really love doing it, so it’s worth the time, and I really want more people to see it. That’s part of the challenge, getting that open and available to everyone.

“Can you tell me what advice would you give to other entrepreneurs or other people who are just starting out their own businesses? In music or otherwise.”

I’d say, especially in music, don’t give up on what you’re doing because the business is really just a combination of all your time and your effort and everything you’re doing. Being all about the profit isn’t really correct for your business because most new businesses don’t profit for three years to five years after the formation. As you’re starting don’t let anybody talk you down, especially if you’re a musician. Your music isn’t going to suit everybody’s tastes, even if you’re the biggest musician in the world! You really have to let people say whatever they want about your stuff, but don’t take it personally because a lot of them will probably change their minds at times, or they might like another song of yours.

How has your life changed since you started this business?

I’ve had it informally for a long time. I’m happier with it now that it’s formalized, it shows how serious I am and that it is a full thing that I’m investing in and it’s not just a side project when I have the money behind it. It’s motivated me more to keep working towards it just because of the additional costs. And I have about 50,000 followers already so…

“WHAT! I didn’t know that. That’s crazy. Congratulations.”

It’s mostly Instagram. Part of the challenge is getting people that are on different social sites to see what else I have or to go to my shop and all that. They want to like you as much as they can when they’re around on your social sites, but they don’t necessarily see anything else you make. So that’s part of the challenge.

“Especially Instagram because it’s so visual, and, as an artist or as a music artist, that’s a whole other issue. But I guess they have video now, too.”

“What’s the next thing for your business – your artistic vision?”

I’m finishing up my EP; it’s called Electro Papi EP. It’s almost done. I’m about halfway done. I haven’t figured out how many tracks I’m going to do, but I’m thinking probably six tracks. I have a demo that’s already out. If you want to download that, that’s on my website. I also have 15 other free songs you get if you join my email list. I’m going to send one of the songs that’s from the upcoming EP so you guys can listen to it in this interview. I also have a YouTube channel, https://www.youtube.com/user/ALittleShock. So listen to my music there. I have a comedy series, and I talk about magic from different cultures all over the world, if that’s something that interests you. It’s something that interests me.

“You have another whole section on YouTube that’s about magic, and a comedy series?”

One of them is a superhero parody series where I’m a superhero, but he’s super petty, so he doesn’t really save people very often. I’m also going to start doing clothing giveaways as I add new products to my website. I’ll give away one item of clothing to someone that wins the raffle.

Entrants can sign up for my email list here and then they express interest in giveaways during the contest period: https://mailchi.mp/6f35a19f1a9f/sage-awesome-giveaways-exclusives#header

The first giveaway is the hat I wore during this interview: http://www.SageSuede.com/Shop/Snapback.

Definitely don’t give up on your dreams if you are a person in music. I do think it’s worth it to get an LLC just to separate your personal assets. ZenBusiness can be a really good way to do that since they’re a local Austin business and they don’t charge you a filing fee.

“Thank you so much for coming in today. I really appreciate it. And everybody who is out there please make sure you check out Sage Suede.”

Thanks for having me.

Read The Full interview on ZenBusiness.com 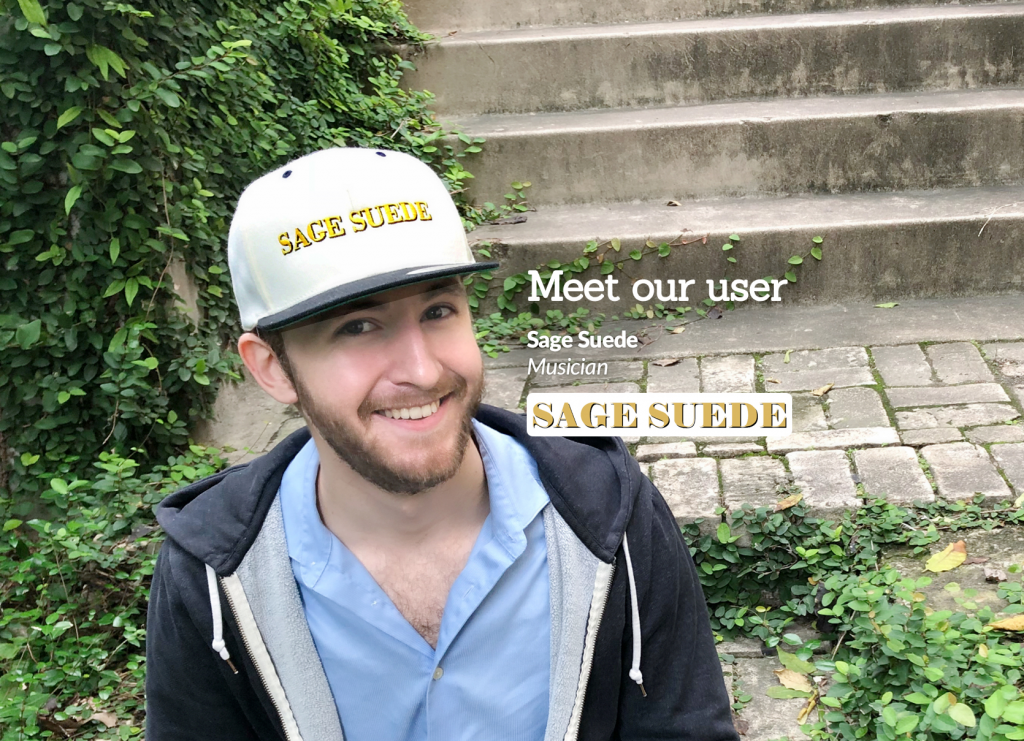 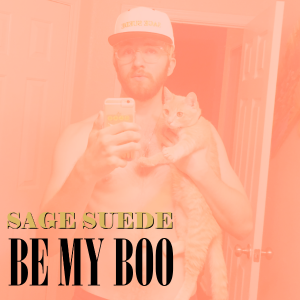